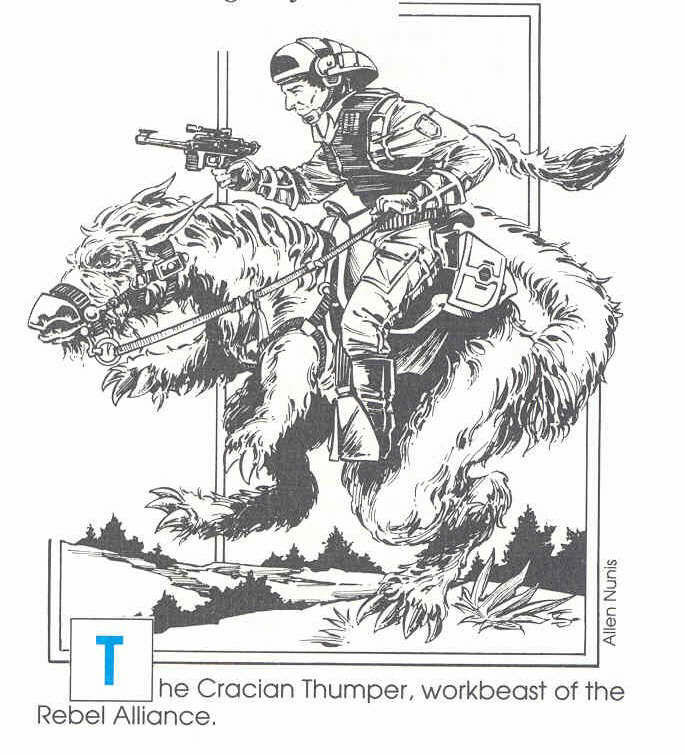 "The Cracian Thumper gets its name not from the sound it makes as it runs, but rather the sound it should make. These remarkably agile beasts run with an extremely light touch upon the earth, making hardly a sound. They should 'thump' when they run, but they don't.

"The Cracian Thumper is an extremely loyal and obedient animal, with an intelligence equal to most domestic pets. They can be taught to follow verbal or touch commands; they can often distinguish between 'friends' and 'enemies'--particularly when the enemy wears a hard plastic shell. And they can also be taught to attack upon command.

"The Thumper is a nasty beast in a fight. It has sharp foreclaws and a powerful whipping tail which is capable of removing the head from an Imperial stormtrooper with ease. Their hind legs are also clawed, and they can lash out backwards while at a full run.

"The Thumper is found on each of the five planets of the Craci system, which is located just within the boundaries of the Corporate Sector. They have been domesticated for years; there are millions of them on human-populated planets across the galaxy."

STATS: (D6 roleplaying system)
Dexterity: 3D
Perception: 3D+2
Strength: 3D
Orneriness: 1D
Speed Code: 3D+2
Size: Adults stand 1 to 1.8 meters at the shoulder.
Combat: The Thumper will claw (damage code 3D+1) and whip with its tail (damage code 4D+2). A herbivore, the Thumper has hard, fibrous, flat teeth, ineffective for biting an enemy.
Skills: Move silently 4D.
Using Thumpers in the Roleplaying Game: Players characters may find Thumpers used as mounts on many of the systems neighboring the Corporate Sector. They can carry up to 100 kilos of cargo, or one rider and up to 50 kilos.

"Cracian Thumpers have long been used as workbeasts by the natives of their world of origin. When the Cracians decided to market them to the galaxy, Thumpers became indispensable for use as both riding and pack animals. The original Jomark colonists brought a few of these animals with them, and now the main continent and a few of the larger islands have herds of wild Thumpers living in the wilderness, in addition to the stocks of domestic Thumpers the colonists use for a variety of tasks.

"The Thumper got its name from the sound it should make when it runs. However, the remarkably agile creatures have such a light touch that they hardly make any sound at all. They are extremely loyal and obedient animals. They can be taught to follow verbal or touch commands, and can even distinguish between friends and enemies if their masters train them. Some can be taught to attack on command.

"Sharp foreclaws and a whipping tail provide these creatures with remarkable offensive capabilities. These animals are not aggressive, but will attack if threatened or trained for combat. They fight with sharp foreclaws and by striking with their tail, using it like a whip. Because Thumpers are herbivores, they have hard, flat teeth which are not useful as biting weapons."

"C'baoth awakened suddenly, his black-edged dreams giving way to the sudden realization that someone was approaching.
"For a moment he lay there in the darkness, his long white beard scratching gently against his chest as he breathed, his mind reaching out through the Force to track along the road from the High Castle to the cluster of villages at the base of the rim mountains. It was hard to concentrate--so very hard--but with a perverse grimness he ignored the fatigue-driven pain and kept at it. There . . . no . . . there. A lone man riding a Cracian Thumper, laboring over one of the steeper sections of the roadway. Most likely a messenger, come to bring him some news from the villagers below."

"The messenger had dismounted from his Thumper and was standing beside the gate now, his sense that of a man prepared to await the convenience of his Master, no matter how long that wait might be."

Links and Other Info

The Cracian Thumper entry in Wookieepedia

Star Wars Technical Commentaries: The Great Heep. Info plus link to a picture. 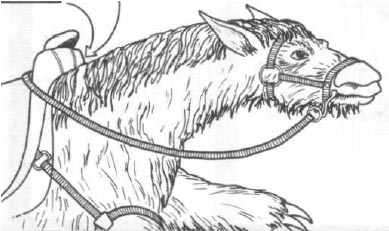