I first saw the dress uniforms in the X-wing comics, and I was very impressed with how they looked. After I got my X-wing pilot costume done, I figured this costume would be a nice, easy one to work on. Here are some pics and information about how I made my dress uniform.


Blazer
The blazer was a generic white blazer I bought from a thrift store. It originally was a v-neck, but I cut the collar off. There are two buttons at navel-level and there are two small front pockets. The buttons should have been on the other side (right, not left) to allow the red to be on top, but this blazer was the absolute closest I found so I just tried to work around that.


Red Stripe
The red stripe was added after I fixed the collar. It's just red fabric from a fabric store (I don't remember what kind, sorry). It's 2.25 inches wide (6 centimeters) and just sewn along the length of the blazer. It goes along the edge of the collar at the top, along the buttons at the bottom and straight down the back.


Rank Insignia
The rank insignia were different in every single source I found, so I kind of put parts of different ones together and came up with my own. At a craft store I got gold mylar and cut it into three rectangles the width of the red stripe. The top one is blank, the bottom one has the actual rank (I put two black oblong dots for a lieutenant. I don't know if that's correct, but for my costume I decree it is <g>), and on the bottom I have a black Rebel Alliance insignia. I just printed it out the correct size and then used glue stick to attach it. I taped the three rectangles together in the back so they hang one under the other (with no room in between them) and then hung them on my uniform using sticky-back safety pins.

Belt
The belt was the simplest part by far. I got grey fabric and sewed a strip of it. My belt is about 2 inches (5 centimeters) wide. Then I put a fancy gold buckle on one end, and I was done. 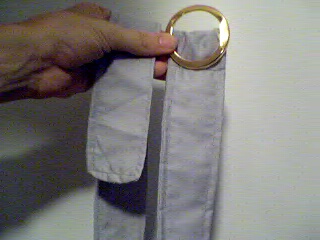 Pants
I use plain black dress pants and tuck them into my boots (and a little puffed out at the knees).


Boots
I use the same calf-high black jackboots that I use for my X-wing pilot costume.

There were several references I used almost exclusively. Though they were all essentially the same, all of them had some kind of detail variation on the dress uniform, so I picked and chose what I thought was best and put it together how I liked.

"The New Republic officers' dress uniform--designed in committee long ago, implemented months or years before Wedge was even aware of its existence--was not the fashion disaster its wearers made it out to be.
"It started with a black sleeveless turtleneck body stocking and boots. Over it went a white jacket, a V-necked garment that fastened at about navel level and below. A broad red band ran along the left hem of the garment, up over the shoulder and at an angle down the back, with a rank designation in gold on the red band above the wearer's left breast. A gray belt over the jacket completed the outfit.
"There were variations to the uniform, with Starfighter Command utilizing black body stockings and Fleet Command preferring gray, for instance. Higher-ranking officers often preferred instead, and were allowed, to wear somewhat costlier and better-kept versions of their day uniforms in formal circumstances.
"It was, Wedge thought, the body stocking that most wearers objected to. Flight suits and pilot day uniforms were baggy things festooned with pockets. They were comfortable. The wearer could carry his datapad, plus amusements and weapons for a half squad, in those pockets. The dress uniform body stocking had no pockets, and the jacket had only a couple of small ones--barely large enough for datacards. Too, the body stocking revealed any extra weight its wearer might be carrying, a fact not at all appreciated by image-conscious officers. . .and pilots were often the most image-conscious of all."


X-wing Rogue Squadron comic books by Michael Stackpole:
"Mandatory Retirement" #1; "The Warrior Princess" #1
The main differences in these really involved the red stripe and rank designation. In some, the red stripe was straight down the back, others at an angle. Some had it stop at the belt on both the front and back, and in others it went the whole way. It really came down to personal preference and ease of making it for me.

Want a bunch more pictures? Here are scans from a lot of the dress uniform illustrations in the comic books. May be graphic-intense. Also, there may be spoilers for each story in the pictures.


Any further questions, feel free to e-mail me.